more of my play time

Good morning.
After writing yesterday's post for the blog I continued playing.

In the week I had watched a programme on Hochanda where John Lockwood (aka John Next Door) was demonstrating his new mixed media plate.  I was curious about it but that was all - although I wondered if I could use my Gelli plate the way he was using his item.  But that is for another day's play.

The demo he did that caught my eye was one where he sponged white Gesso onto white card & then coloured it with inks.  I cannot remember if he was using colour cloud ink, or possibly Oxide Distress Inks.  In any case I rather liked the finish & thought "I must try that".  So on Thursday I applied Gesso to some card & left t to dry.

During my play yesterday - I gave some thought to what inks to use.  I do have quite a varied collection, some of which have not seen light of day for quite a while.  You may remember my comment at the end of an earlier post of not being tempted to buy any of the new ink pads.  So, I stuck to my promise to myself & dug out my Versa Magic inks.  These are pigment rather than dye inks, but I thought I would give them a try. After all, as we are so often told - it is only a piece of card.

Here is the exciting photo of a piece of white card dabbed over with white gesso; 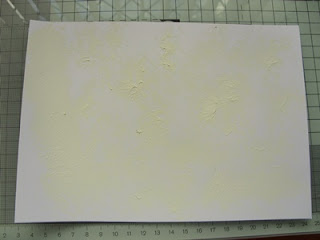 & here are the finished pieces of card after using the inks over them; 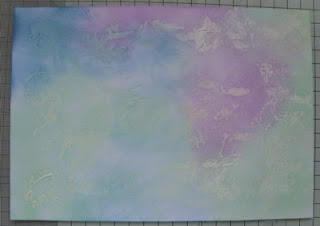 This one had shades of lilac, blue & green on it, very soft finish 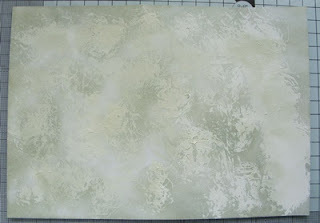 This one had a very strange shade - but it came out with this lovely dusty green  & looked almost foliage print. I wondered whether to put a second or third colour over it & decided to leave it with just one colour.  Except, that I picked up a shade of white that was a light pearly colour & I gently stroked it across the green which it softened just a little & made a really nice background card. 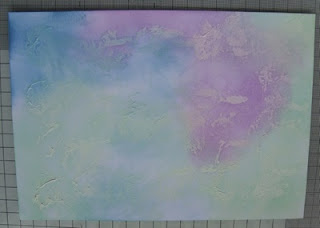 Having done that I tried it on one half of the other piece.  It's a little difficult to see much difference in the photo - but I think I applied it to the right hand side as you are looking at it.

I will be doing some more like that.  I will prepare the gesso part of it later today for use in the week when it is dry.  Now! how am I going to use it

That is me for today.  Have a good day
'Bye.