Good afternoon everyone - oh dear what a miserable afternoon it is too.  Weather wise of course, & on the TV just now they have forecast snow for tomorrow.  Just what we need - I don't think. Ooh - our weather is so fickle - the sun is shining now.

The card I have to show you today is probably my most recently made one as it was for Bob's birthday at the beginning of the month. 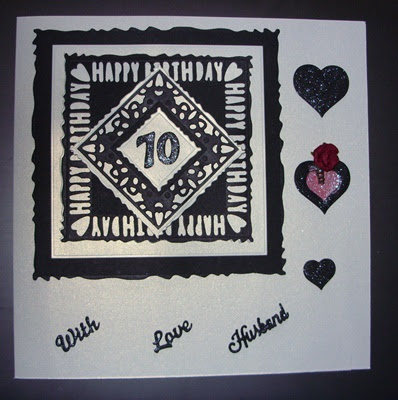 As you can see he is celebrating one of those "big" birthdays.

My base card was a large cream square card & the layers are black & cream.  The topper was a Tonic die set I have & it consists of a couple of different word frames.  The "70" came from a set of dies which were in fact one of my first sets of dies ever.  They consist of a complete alphabet set in thick & thin dies plus numerals - also thick & thin.  The numbers on the card are the thicker version.  Having the 2 thickness you can layer them together giving a different look.

It is only looking at the photo above that I can see that the "7" is slightly at the wrong angle.  The upright should have been more slanted so that the top line would be straight - level.  At a quick glance it could look like "10" rather than "70".  Still Bob knew what it was & its not that bad.

Just after Christmas I treated myself to a large set of Spectrum Noir sparkle pens & I used the Graphite (which is almost black) on the hearts, 70 & words.  I am looking forward to playing with these in a more spectacular way.

Right now I am waiting for my brother to arrive for a very short visit - he has to go back tomorrow.  I am just hoping this weather isn't holding him up - not absolutely sure where he is coming from today as he has been over all the weekend for a friends birthday.

Well that is me for today - I am off to see the oncologist tomorrow - so possibly another long day at Glan Clwyd to look forward to.

Oops - not gone away yet.  I have just googled the dies I was talking about for a photo & also found a photo of my first die-cutting machine.  Which, by the way, sits on a shelf in my craft room & is still used from time to time.  Here is the machine;- 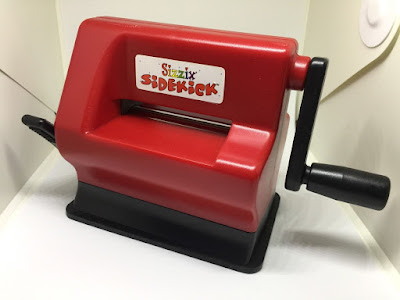 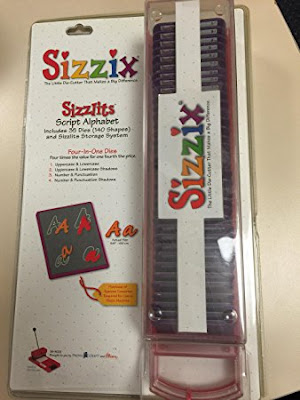 & these are the exact dies.
The alphabet set came with uppercase & lowercase
I had to buy the numerals as a separate set.

Email ThisBlogThis!Share to TwitterShare to FacebookShare to Pinterest
Labels: a recent card