This afternoon I have the second of my 2 recent work in progress cards;

The card this time has a lovely large poppy image; 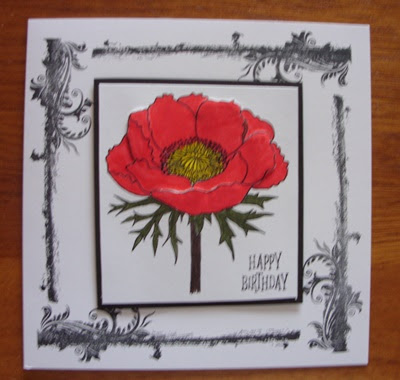 I think this is a Stamps Away poppy which I have had for quite a while.  I coloured the image with my Promarker pens after stamping it with Memento black ink.  Once coloured in, I trimmed it to size & then very carefully cut around a couple of the top petals behind which I put sticky pads for them to be dimensional. It was then layered onto a black card leaving a very narrow border.

When deciding what size card to put it on I rather liked it on the larger card but not sure about all that white space.  White space is good on a card but I felt there was just a bit too much.  I knew that somewhere I had various border stamps, so had a look through them all & decided on this rather flamboyant one.

Now! my photo is a little fuzzy but the borders are meant to look the way they do - slightly messy.  I just thought it went better with the leaves under the poppy.  What do you think?

That is me for today - will try & be more productive over next few days & hopefully have something to use.

Email ThisBlogThis!Share to TwitterShare to FacebookShare to Pinterest
Labels: another recent card, work in progress