This afternoon I have the second set of photos from the Mold club meeting last Thursday, & they are of their project.

The project subject was introduced by Joanna which she described as "Partial scene masking with dies". 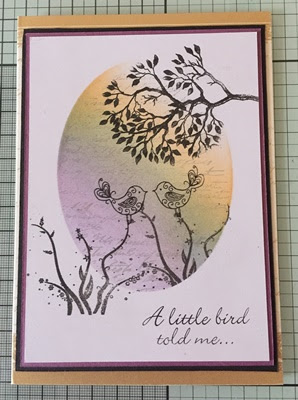 If you look at the coloured oval you will see that the colour doesn't completely cover it.
At top right it is still white - just under that branch.
That is the main idea behind this technique plus using a die-cut aperture of any shape you like.

Here are the toppers made by Janet on the evening.
True to Janet's style there is some glitter.
I particularly like the one on the left it is so delicate. 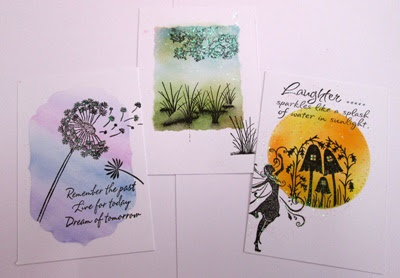 This set is the work of Joan.
You can see that the centre one has a white space at top right. The one on the right is completely coloured & the one on the left - very cleverly - the die-cut shape is implied but the stamping around the aperture & there is no colour.
Great idea Joan. 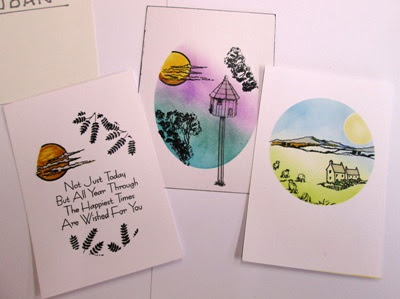 These are my efforts.
At first I was a bit heavy handed with the ink - I used the foam applicator.,
My last attempt was the bottom one & I applied the ink on that one with a tissue wrapped around my finger.  Wendy from Card-io uses a similar method with a dry baby wipe. 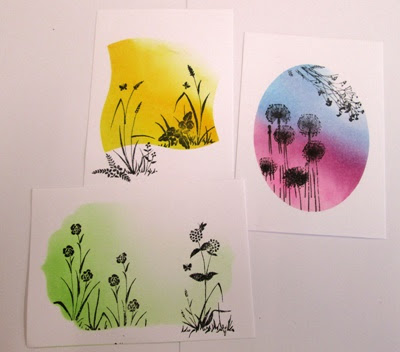 From Lynn there are some different ideas with this technique.
I really like the pink one that has had the shape outlined with a fine line pen & a "shaky" line.
Then the right hand one the die cut has been left white & the remainder of the card coloured. 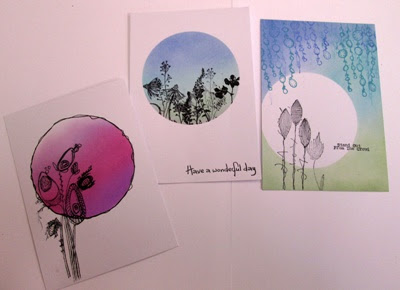 Mair obviously enjoyed this technique as she has produced 4 pieces.
I really like the one with the bird where the leaves take your eye into the centre, & the one on the left really is a lovely scene. 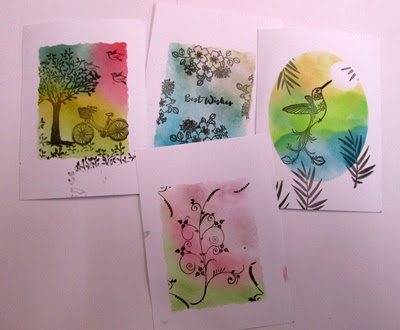 Maureen kept to the faded colouring for her pieces, where the top of each shape has been left white.  Her designs really show some lovely off the die-cut shape stamping. 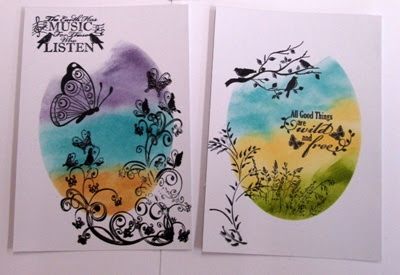 Rachel stayed clear of foliage & birds & shows just how good this technique looks whatever images you use.  I particularly like the one on the right with the die-cut shape outlined, & the flowers peeping out from behind the shape. Rachel would have used the positive piece of the die-cut to mask her work so that the flowers are in the background. 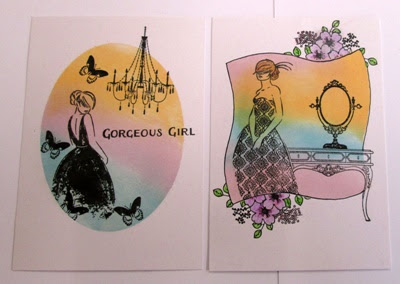 The next 4 sets of photos are the work of Joanna.
Some of these she brought in with her & she also showed us all the technique & how to achieve the results, before we had a go. They really show how different types of stamps also work - outline or solid. 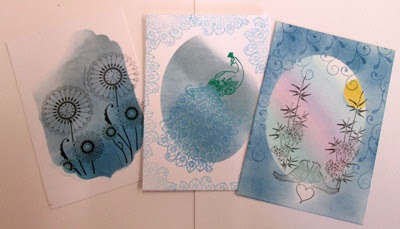 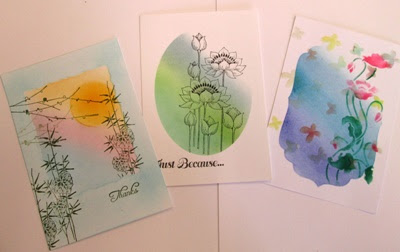 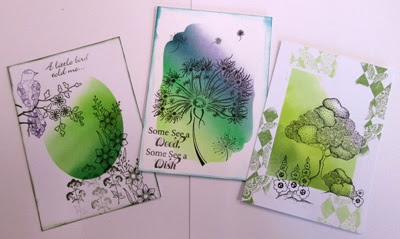 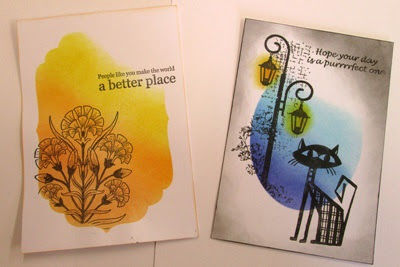 Amongst these samples Joanna has given lots of ideas of different ways to use this technique & obviously you can see from the other photos above how much she inspired us all.

Thank you Joanna - that was most enjoyable.
All I have to do now - is turn mine into cards.

I have a few more photos from that meeting to show you & I will put them here tomorrow.

Right now I had better get in my craft room & see what I can do with my Partial Scene creations, Although before that I had better sort things out for tonight's Mold II meeting.