Last night was the June meeting for the CSNW club who meet in Rhuddlan.  The ladies brought along finished cards from the last meeting we had which was at the beginning of April & some Show & Tell cards from May's meeting which didn't take place due to me being ill.  So, I had lots of photos to take, along with photos of their project last night.

Bob & I are going to be out most of today meeting with a friend - so I won't have time to load the photos & resize them for today.  I will do that tomorrow & start showing them later in the day.

Therefore for todays post I am showing you a member showcase card which is another of the cards that Betty (formerly of Mold II club) has sent me; 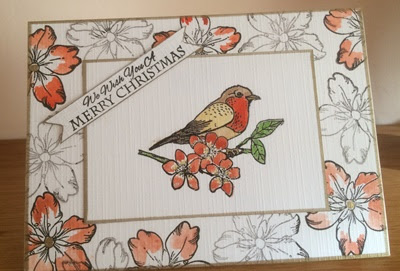 This card is beautiful Betty.  I love the way you have used the flowers as a border to the focal image & what a lovely different Christmas card it makes.  Goodness - Christmas cards!  I think I made a couple earlier in the year in the hope I would not be giving myself a last minute rush this year.  They are in a box marked "Finished Christmas cards" - I guess it is time I created some more to go with them.

Thank you again Betty for sending these to me.  Were the images a freebie on a magazine?

That is my post for today - tomorrow I will have the first set of photos from last nights CSNW meeting.

Have a nice day everyone.  'Bye.

I have been asked the question several times as to whether they are connected & the answer is No - other than the fact that I am linked to both.  It was one of the first members of CSNW that came up with the name quite a long time back, possibly helped by the knowledge of the HSNW name.  I did at one time many years ago ask if the Mold clubs would like to give themselves a name but we didn't come up with one. They are known as Mold & Mold II purely for me to distinguish one from the other when talking about them here.