Good evening everyone I hope you have been having a nice weekend.

This weekend I decided to work on one project.  I suspect that if I had started it earlier in the day on Saturday & was a little more prepared with everything ready on my desk I may very well have made it in a day.  But I don't work that way at the moment & I don't work all day continuously - so it took me across the weekend to make.

When I was looking for inspiration for the "special" mini album I am making I came across another design which I thought I would like to try.  So I put it on my list of things to do & it was this weekend I decided to have a go.

The project was to make a "One Sheet Wonder" mini album.  It is made in one piece from a sheet of 12 x 12 card.  In reality you need 2 sheets of the same 12 x 12 card as when you start making it you realise that if it is going to hold tags & other things they are best made from the same card.  It would also be a good idea to think about how many tags you were making & how many sheets of decorative paper you would need for the whole project.  I didn't initially, & that is why it took a little longer as I had to look amongst my paper stash to find other papers that would go with my idea.  So, some time lost.

However I have finished it, & thought I would show it to you.

Basically it is a 3-fold album with pockets & flaps; 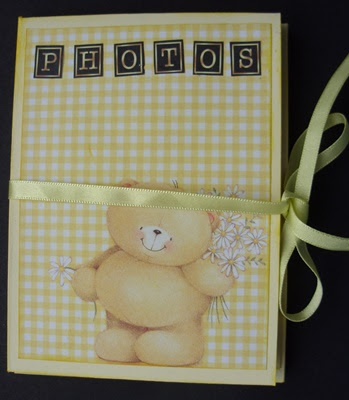 This is the front cover.
I haven't tied the ribbon bow very well because I don't want to keep tying & untying it.
Whilst I was looking for some more papers to use I found a book of alphabets I had forgotten about & thought these letters were just right for it. 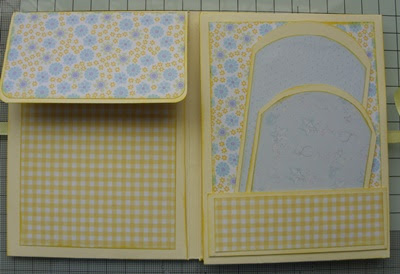 This shows the front cover opened up along with the third page which is folded over to the left & covering the central inside page.
As you can see the left hand page has a flap - there is another photo later.
The right hand page has a small pocket with 2 tags. 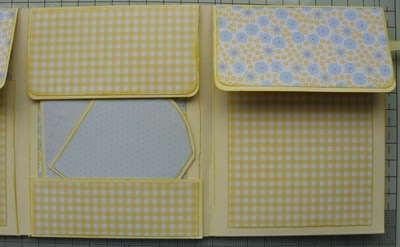 In this photo I have folded back the third page which uncovers the second or central page.
The central page has a pocket with 2 tags in & a flap, another view below. 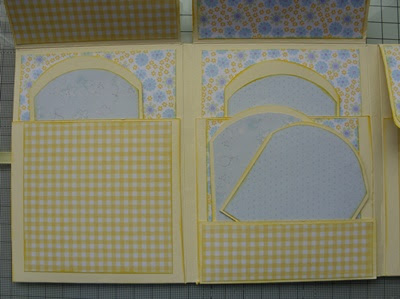 This is another view of the first & second (central) page with the flaps opened up.
In the first page there is a pocket with a tag & in the second (central) page there is the pocket with the 2 tags as was shown in the photo above.  But now the tag in the main pocket can be seen.
For this central pocket I used magnets to fasten the flap closed.
I did toy with the idea of magnets on each of the flaps but decided for the first album just the one set was enough. 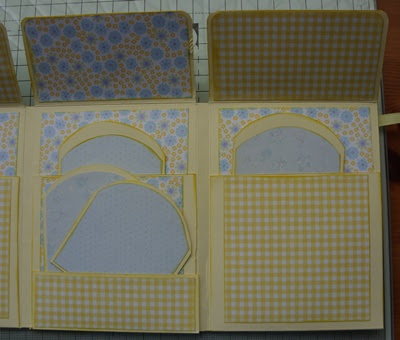 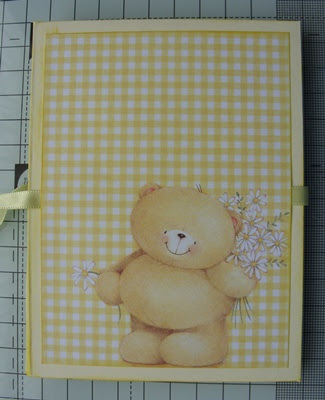 At this stage I have left the back of the tags plain, but keep thinking whether I want to put decorative paper on those as well.  Will give it some thought.

So all in all a cute little album which I am pleased with & it is capable of holding seven photos if you only put one on each tag.  If you use the other side as well then it can hold another seven, plus there are 2 pocket fronts that could each hold a photo  - making a total of 16 photos.  Of course the two main pocket fronts or the backs of the tags could be used for journaling instead.

I kept the design without embellishments as I am giving it to a colleague for their fund raising tombola stall.

I enjoyed doing this little project & already have papers on my desk for another.  Just need 2 sheets of 12 x 12 the same colour & to work out sizes & amounts of designer paper before I start.

Enjoy the rest of the weekend.
'Bye for now.